So I've been really absent from my local 40k scene recently!  One of my usual players moved away, and the other has been so busy with work and other life drama that I haven't played in nearly a year!  The only 30k games that I've played are my usual trips to Jacksonville and Adepticon.
But that doesn't mean I haven't been gaming! 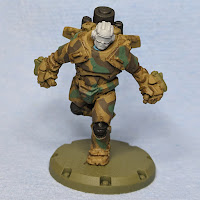 The first game that drug me into its clutches was Dust 1947 (http://www.dustgame.com/).  Now that much of the drama is over with, and the releases are moving forward (somewhat) regularly, the game's following seems to be growing again.  Of course, I just HAD to pick up an army with all of the older plastic kits on clearance.  I mean I would be LOSING money if I didn't, right?

Okay, all fiscal stupidity aside, it has been fun to acquire and start to paint - but as of now I haven't found too many local players.  (More on that later)

Lots of "primed" miniatures await my paintbrush, but thankfully primed models aren't looked down on (too much) on the gaming tables! (at least they have decals!) 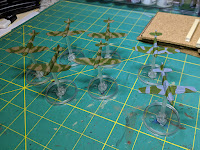 Not to be outdone, Warlord Games decided to roll out a lot of stuff for their WW2 aerial combat game Blood Red Skies at Adepticon.  Of course with three of us former military guys standing around a table with the reps saying "Do you want to play a demo game", we couldn't refuse.  So, thanks to Jon Russell, we're hooked.  Jerk.

Okay, all joking aside, it has been fun to attempt to paint some authentic WW2 aircraft schemes at 1:200 scale.  Best of all, it has forced me to pick up my airbrush and get over the intimidation factor of learning a new tool (and failing miserably).  Of course, now that I'm having fun with it, I guess I'll have to actually take an airbrush class to get better.  Maybe I can also blame that on Jon...

Anyway, so - where to from here.  I'm sure I won't be abandoning 40k anytime soon, and certainly not 30k Heresy!  But I have opened my aperture to hobby work in some other genres, so don't be surprised if the updates that have been absent for the last year - are not put in place - and they involve games OTHER than GW's 40k/30k line!

If you want to check out my blog for my Dust 1947 army in progress it is here:


Dust of the Andes